BuildEazy is a website consisting mainly of our own free original woodworking plans and building projects designed for the Do-It-Yourselfer.

Most of the plans, projects, and articles within the site are authored by the site owner Les Kenny (unless otherwise stated).

Les is a retired building contractor.

Two “DIY for Kids” books (co-authored with his daughter Roseanne) published in 2004 and 2005 respectively got him started on a writing career publishing numerous online woodworking projects, primarily for this website www.buildeazy.com which is populated with his do-it-yourself woodworking and building projects.

The site was originally orchestrated by Les and his daughter Roseanne, a graphic designer.

Les now pretty much runs the site by himself.

BuildEazy does not get involved in any onsite discussion boards or forums or provide any personal project help (simply a time thing), but rather leaves that up to other willing people through the online facilities that are supplied to do just that. This allows Les to get on with what he enjoys most and does best – making things and writing about them.

It is a format that seems to works pretty well. One of the best help tonics has proved to be in the form of ‘User Photo/Comments’ that are added to the end of most projects.

Woodworking or building type plans and projects are continually added to the site, as are the photos and stories that are sent in to us of BuildEazy projects undertaken by other people.

www.buildeazy.com now has a world wide patronage with most visitors coming from (in descending order) USA, Canada, UK, Australasia, South Africa and the rest.

All plans and articles are written using both the imperial (ft and inch) measuring system, and the metric (mm) measuring system with the aim to be as universally understandable as possible.

Les Kenny, Family, and Buildeazy, in Google video
In Dec 14, Google Adsense team sent a crew to make a short video of Les Kenny, family, buildeazy.com, and adsense.
Two days of intense filming condensed into a video a little over a minute long.

A bit more about us 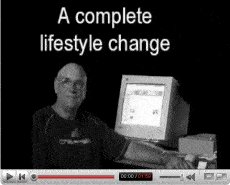 The video pretty much tells about us and the history of BuildEazy.

In the later part of 2007 we entered a video and short story into “the AdSense Story Contest” which was a contest organized by Google asking publishers (website owners) to submit a two minute video of their experiences with AdSense.

Most unexpectedly, our video and story was picked to be featured in the Adsense blog.
Click here to see.

This article has been slightly edited from the original on two points.

We hope you can get some use from the content in this site.

Have a nice day!