The lads were working away when the main spring in their compound miter saw broke. For those of you who do not know, a compound miter saw is a circular saw on an arm that can be raised up or down with the help of a spring where the arm pivots.

Anyway… They took the saw to the Service Department, only to be told that a new spring had to come from down the line and could take up to a week to get in. WHAT TO DO? To hire a saw for a week seemed a bit extravagant and to purchase a new saw seemed even more extravagant.

“I know!” said one, with a smirk spreading across his face. “Let’s have a weeks holiday.”

How was it fixed? 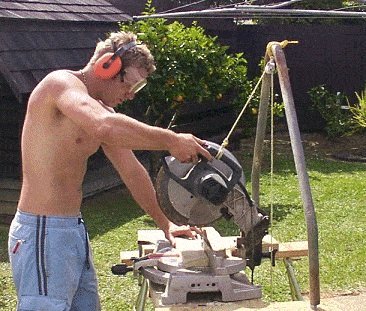 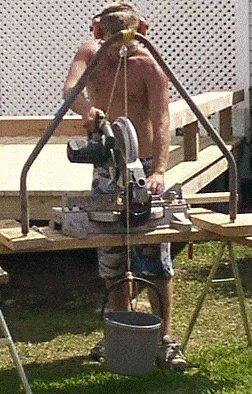 They found an old trampoline leg, which is just a bit of u-shaped hollow pipe, and fixed it over the compound miter saw. It was held in placed by two bolts going through the workbench structure and up into the hollow pipe.

A piece of rope was tied around the compound miter saw handle and then thread through a pulley at the top of the u-shaped pipe and then tied to the handle of a 10 litre bucket (the counter-weight).

Water was poured into the bucket until the compound miter saw arm was raised. In this case the bucket was about 3/4 full, or about 7 litres or about 7 kilograms.

How to read and understand Plans